Remember when I used to eat cupcakes and other sweets all the time? Yeah, me too. Then I lost 20ish pounds and don't eat them as often. I do, however, enjoy a good frozen yogurt from Go Berry whenever I can remember to make it down to Fore Street when they are open. I wasn't a fan the first time I went in when they initially opened (I can't even remember why), but over the summer when I didn't really care to eat anything... GoBerry was something that I would always find appealing. GoBerry's frozen yogurt, tacos and Thai food was pretty much what I lived on for a couple of months.

What I like about GoBerry is that you can have many options for toppings, including fresh fruit, but most importantly, chocolate chips. I have managed to acquire a fairly significant chocolate chip addiction. I can't start my day without a greek yogurt and chocolate chip ratio of 1:1. No joke. The friendly folks that work there are good sources of flavor/topping combinations. I usually like to have two flavors with chocolate chips as a topping. However, there are times that I have asked for suggestions from the staff and they gave me some that led to a very delicious treat that I would not have come up with on my own. They also steered me away from a flavor combination that I was thinking of trying, which would not have been as delicious as I thought it might be.

Now I wish it weren't past the GoBerry closing time, because I sure do have a jonesin' for some froyo. Their facebook page keeps me updated to their current flavor offerings, which is convenient as I like to know my options prior to arrival. I am finicky and it can take me a very long time to make my mind up.

I feel like when the weather gets a little warmer again, I will once again be more adventurous at trying new things and hunting out the "sweet" stuff.
Posted by teh bobbi at 7:08 PM No comments:

Last week we went to the White Mountains, specifically North Conway, for a few days away from the hustle and bustle of Portland. I was quite excited to be able to try the White Mountain Cupcakery, which I have "liked" on facebook for a while. I tried the Boston Cream cupcake and Kate had the Chocolate Raspberry. 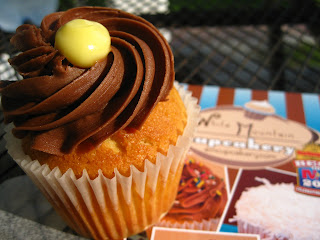 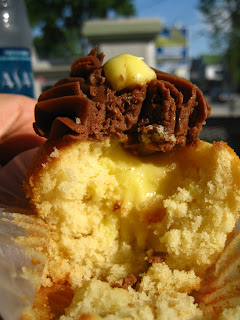 Inside the Boston Cream 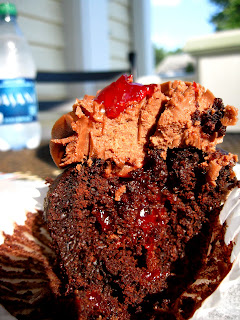 Unfortunately, I will have to only say that they were good, but not great. I wish that we had gone earlier in the day, because by the time that we made it in it was closing time and the flavor selection was limited. It is far too easy to lose track of time when in the beautiful White Mountain Forest. The customer service was great, as they made sure that we had everything we needed even though we were there after they had actually closed. They also took our trash for us after we finished our cupcakes outside!

I liked the cream for the Boston Cream cupcake and the butter cream was good, but Kate and I both felt that perhaps a ganache would have been a better choice instead of a frosting. The other cupcakes also had massive amounts of frosting on their cupcakes, which at a certain point just seems excessive, unless you really LOVE frosting (and I know some people do).

We were unfortunately not there on the weekend, which is when they have their special daily flavors. I really wanted to try one of those ones! Or at least see what they came up with! I have pretty high expectations when it comes to cupcakes now, but I would go back to their shop the next time I am in North Conway. I loved their sign, which might sound weird and now I wish I had taken a picture of it, but it was really adorable. They were also really nice, which makes me like a place even if I'm not 100% pleased with the product. So, I look forward to the next time I can make it there. I hope that I can get the Green Mint Mountain Cupcake or maybe even be there on a weekend day with a special flavor that I will want to try.
Check them out if you are in that area and let me know how you like them! 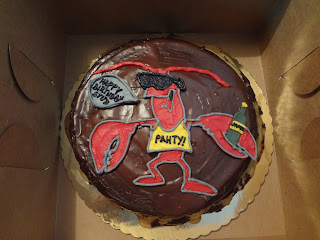 Just look at this awesome cake that Kate made for our pal Andy's birthday a few weeks ago. It is a brownie layer cake, with cream caramel in the middle and cream caramel with chocolate ganache topping. Also, an amazing frosting lobster holding a bottle of Jameson, which a few shots of had been poured over the brownie cake prior to putting the topping on. It was amazing.
Posted by teh bobbi at 3:53 PM No comments:

Bakery on the Hill

Thank goodness Bakery on the Hill is open again. There was a change of ownership and during that period of time and some renovations, it was closed for a month or two. I was quite distraught seeing as it was the end of tax season and I was very much in the need for some delicious baked goods. Now they are open again and the deserts are just as fantastic as they were under the prior ownership. I hadn't tried a cupcake there before the changeover, but a few weeks ago I popped in on my way to get a slice at Otto's and picked one up. I decided that some desert was needed to round out that very healthy meal of pizza. 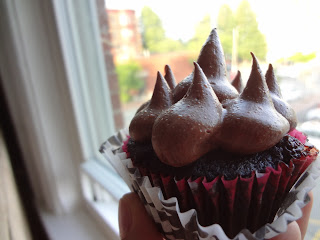 
The cupcake was everything I would ever want in a cupcake. The cake was moist, had a great chocolate flavor and the frosting was light. I love a good butter cream, don't get me wrong, but there are often times when it is much too heavy for the cupcake that it is paired with. This was the perfect pairing of frosting and cake. Both were light and sweet, however neither was too sweet. I find that it is quite a feat for a cupcake in today's market to manage to avoid that "overdone" trap that so many bakeries that make cupcakes have fallen into. Sometimes you just want a basic cupcake, that is really effing good, without the five inches of frosting and a level of sweetness that should result in an immediate trip to the dentist. Bakery on the Hill is a master of this really effing good cupcake.

I also decided that I needed another treat, since I would be sharing both of these with my significant other. I made the very tough decision (only because they have so many visually appealing treats to choose from) and went with this raspberry mousse, chocolate treat. I can't remember the exact name they gave it, but I do recall how delicious it was. 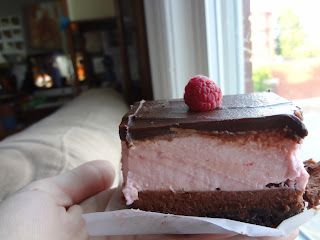 This picture only slightly does it justice.The raspberry is quite mild in the cream portion, which was perfect for me as I am not very fond of raspberry. It is quite delicious in this treat and the chocolate crust on the bottom was, as silly as it might sound, my favorite part of it. Each layer is distinctly different and adds in an additional element of complexity with texture and flavor.

I am very lucky that they are just around the corner from me on Congress Street, but they are well worth any drive.

teh bobbi
A cupcake lover since early childhood, always on the search for the best cupcake wherever she may go.